PowerPDU 4KS can be mounted in rack cabinets – horizontally, vertically, or as a 1U device. Each output can user switch manually over the web, the NETIO cloud service, or with a Mobile App (Locally or via NETIO Cloud). The DI (Digital Input) can control the outputs or count S0 pulses (ext. power metering).PDU supports Open API for 3rd party integration (http JSON, Modbus/TCP, SNMP, MQTT-flex, Telnet, …).

NETIO Cloud is a TLS-secured service for controlling the outputs from anywhere (Web or Open API).

AV drivers make it easy to connect NETIO sockets to professional Audio/Video systems such as Neets, CRESTRON, Control4 and more. 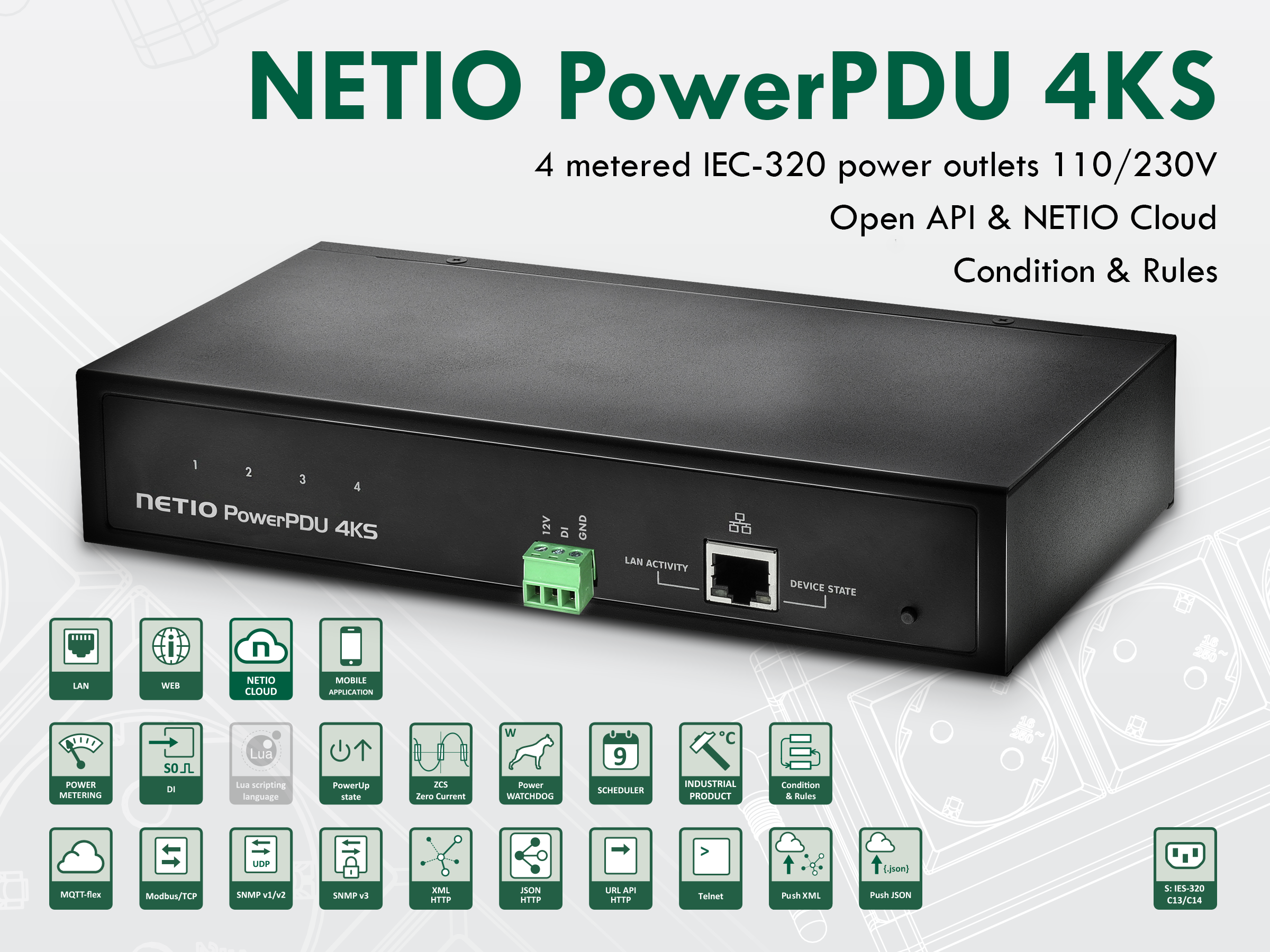 NETIO PowerPDU 4KS is suitable for industrial applications. The product works in a wide temperature range (–20°C to +65°C), supports firmware upgrades over the web, remembers the last socket states before being powered off, and its relays switch at zero current.

A power-on delay can be configured for each output. In this way, the outputs can be switched on in a sequence after a power outage. 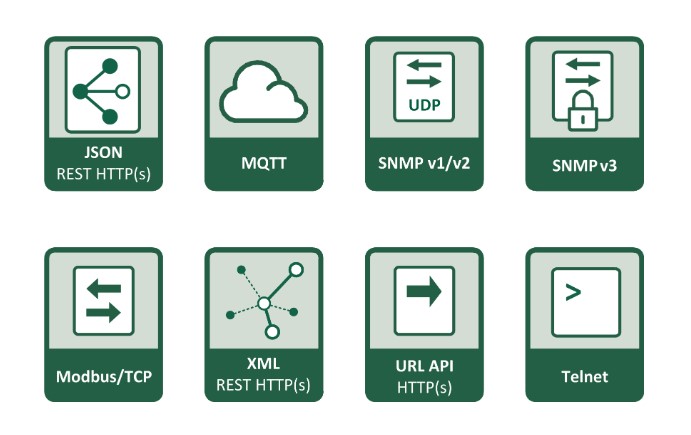 The open API can use one protocol at a time, chosen from among the supported M2M protocols:

A digital input (DI) can be used to control any of the outputs(s) or count S0 pulses. The DI can be connected to a button (dry contact) or used as a S0 pulse counter for reading energy consumption from an external electricity meter.

The DI state and the S0 counter value are shown in the web interface and accessible over Open API. 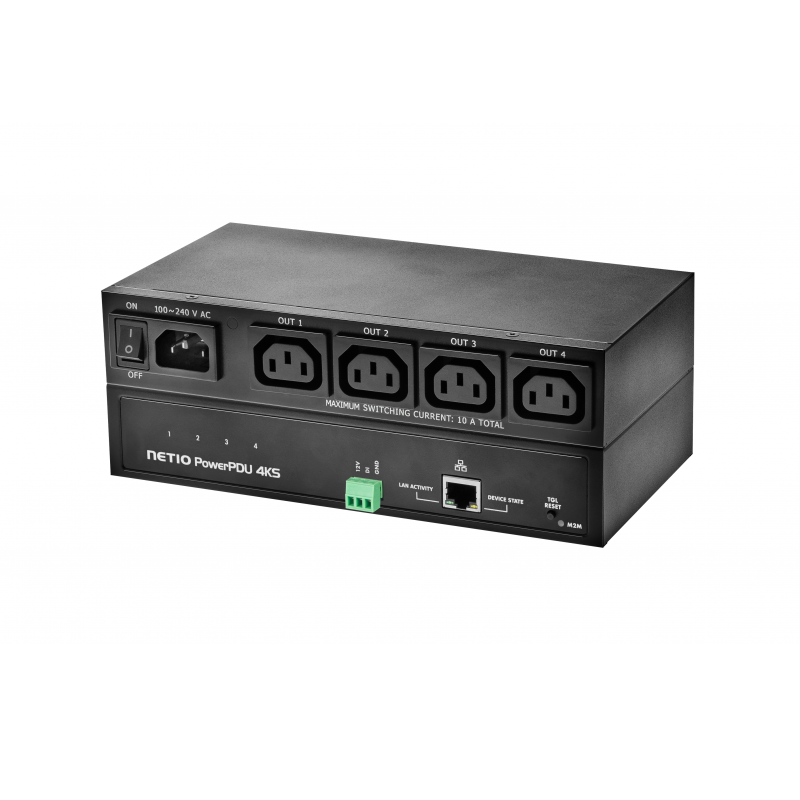 NETIO PDUs are made with quality in mind. Each unit includes a set of supporting functions to ensure reliability and long service life of the product in real-life conditions.

An important feature of NETIO PowerPDU 4KS is ZCS (Zero Current Switching). ZCS controls the exact time when the mechanical relay contacts close and open. The relay contacts switch the output on or off when the current crosses the zero level.

For some applications, it is important to set the correct state of a power output immediately after power is turned on (or restored). The “PowerUp state” parameter defines the behavior of the 110/230V outlets just after power is restored, before the standard communication with the master system is established.

Delayed switch-on function ensures that the 110/230V power output is switched on with a configurable delay (several seconds) after the power is restored. This can avoid circuit breaker tripping when power is restored after an outage.

Device can be controlled: 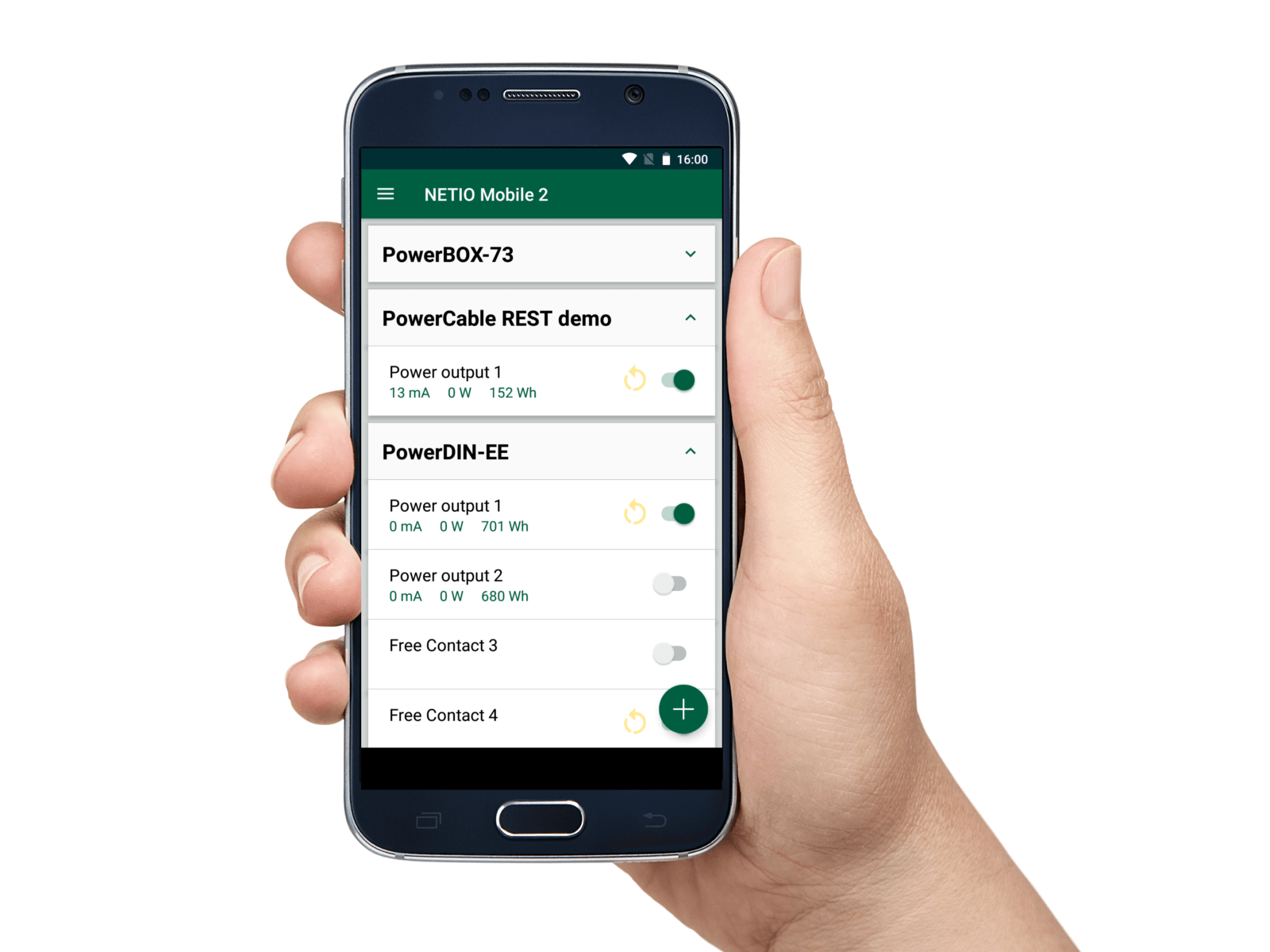 The switching of outlets can be time-controlled by the Scheduler with a graphical interface. Switching on/off at specific times can be easily configured.

• Each output can have its own schedule, according which the output is switched
• While Scheduler (calendar) is running, the output can be controlled from NETIO Cloud, web interface or Open API
• The Scheduler does not require an internet connection (requires a time source – NTP server – for example a local ADSL / WiFi router) 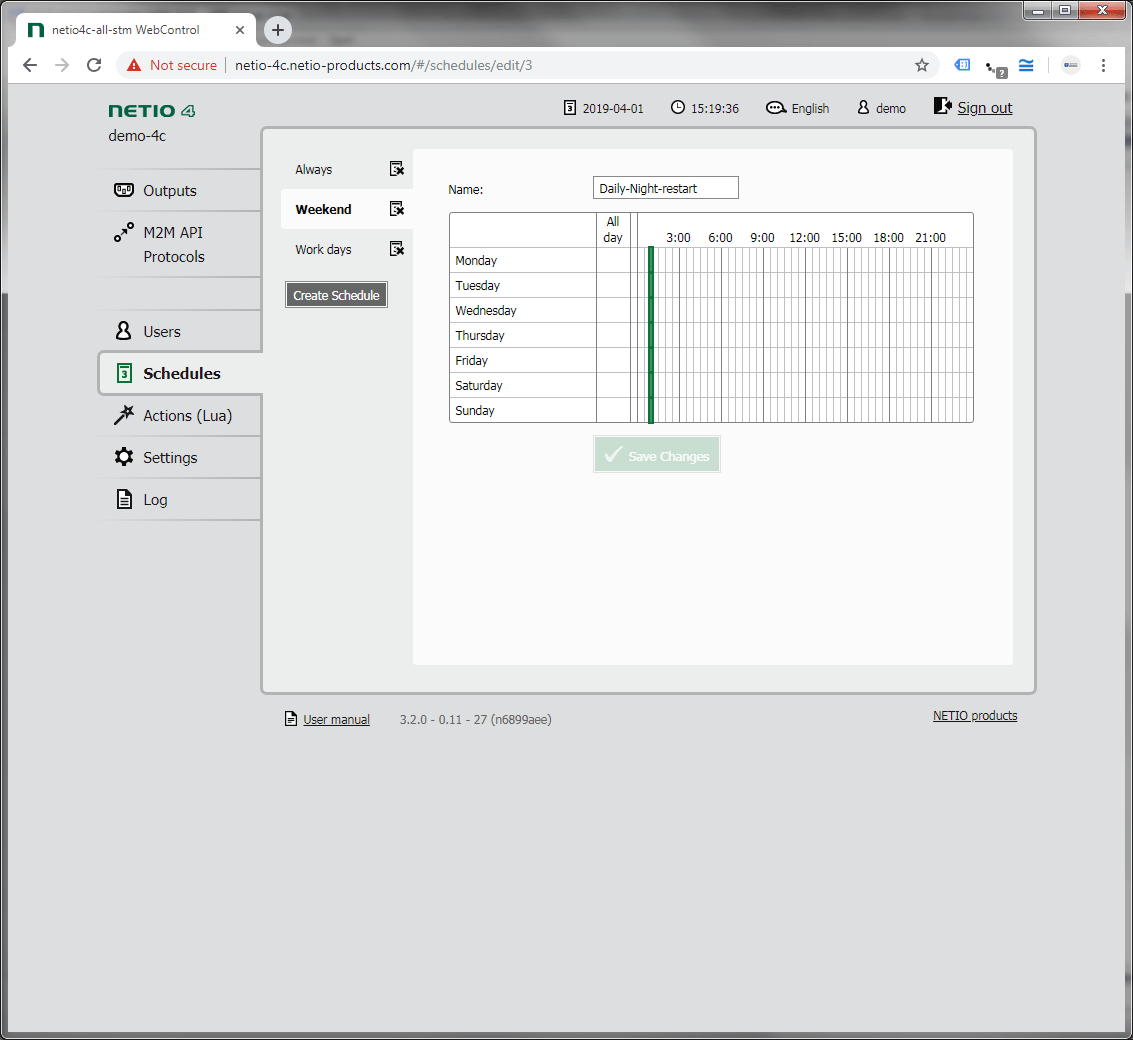