Where does fine sound begin? Where does it end? These are questions that we ask ourselves time and again. In reality, various factors have a considerable impact on the sound quality produced by audio systems, such as the power supply. This is exposed to varying fluctuations depending on the location of your home (city or rural environment).

If we look at this from a purely physical point of view, the music produced by a loudspeaker is ultimately nothing more than domestic current converted into sound. This statement sounds almost too mundane compared to the hi-fi jargon we are all accustomed to because it is obviously more exciting to deliberate the quality of amplifiers, record players or loudspeakers.

There is a basic model which has one filter for all six sockets, whereas the full model comes equipped with six filters. Each socket has a separate filter in this configuration. The models differ not only in the number of filters they have, but also by filter type (1 & 2) configuration. The Power Station AC-4500 was fully developed in-house. In addition, each unit is manufactured in the company’s own factory and, once completed, undergoes rigorous routine testing with the results being recorded.

We have also arranged for an accredited laboratory to verify CE/CB conformity given that safety is paramount for this type of unit. The Power Station’s sensitive technology is packed into a robust metal housing made of 2 mm-thick galvanised sheet steel. The elegant front panel is made of brushed aluminium. The housing interior is also designed in such a way that the socket groups are shielded from one another and any interference attributable to the connected devices is unable to propagate.

We need electrical energy to operate our mains-connected audio system in the living room. This energy is produced in power stations (e.g. coal/hydroelectric/wind power stations) and distributed to consumers via the power grid. Such volumes of energy can only be transmitted physically – via high-voltage (overhead) lines, underground cables, or a combination of the two. Energy is distributed at different voltages in order to minimise conduction losses in the grid.

The higher the transmitted voltage, the lower the loss and the smaller the required cross-sectional dimensions of the transmission lines. With the extra-high voltage (1) up to 380 kV, the power station conveys the current through the transmission grid. Transformers in the voltage transformation substations are used to convert the various voltage levels downwards. The high (2), medium (3) and low (4) voltage power is then distributed to the towns and villages until the 230V power reaches the end consumer, where it can be used by the audio system.

Severe distortion on the power grid is generated by countless consumers – in particular digital devices – and switched-mode power supplies, vehicle-charging stations and photovoltaic systems, among other things. This is increasingly not just limited to urban areas either. This distortion causes the hi-fi components serious problems and can only be partly compensated for by the integrated power supply units and circuits.

The rest impairs the audio signal and “cloaks” the sound produced by the audio system. Not many people out there operate their own power station. Most high-end enthusiasts are forced into using the overloaded power grid and, as we mentioned previously, sound starts at the socket or, in the best-case scenario, at the fuse box. Yet, even at the fuse box, there is interference from all the consumers within your own home and throughout your neighbourhood connected to the power grid. We see this when a light flickers whenever a hair-dryer is used or when loudspeakers crackle whenever the refrigerator compressor starts or a fluorescent lamp is switched on. 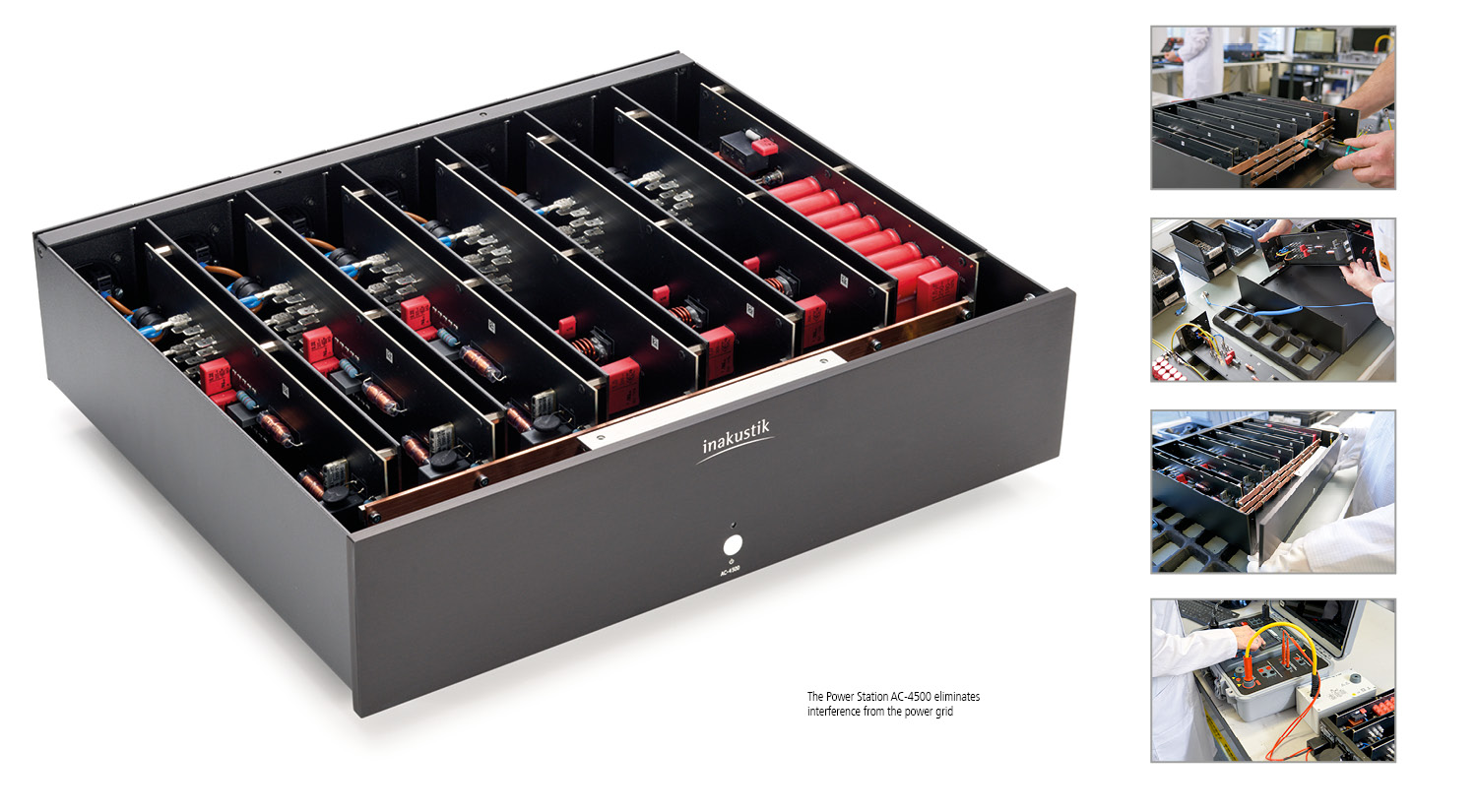 Electromagnetic interference, also known as common-mode interference, can be generated by mobile networks, WLAN networks and Bluetooth devices, among other things, and propagates in the form of airborne electromagnetic waves. In this environment, every device and cable acts like an antenna and generates a voltage potential depending on the field’s magnitude.

The component’s dimensions and the distance away from the source of the interference are a few of the factors that determine the magnitude of the field and the resulting potential. As a result, each component of an audio system generates a different interference potential, which leads to equalising currents travelling through the connected cables. These currents, in turn, interfere with the useful signal.

Ferrite cores are the first solution to correct interference. They suppress HF common-mode interference by virtue of their inductance-enhancing effect. That is why the Power Station AC-4500 comes equipped with powerful ferrite cores positioned directly downstream of the sockets. Tailor-made filter circuits are another solution for minimising unwanted interference. However, it is crucial that the filter type suits the application for which it is required.

The filter design is completely different for both types. Type I is a series filter network in which coils conduct the useful current. These coils offer a high level of resistance against interference. However, type II is a parallel filter network that diverts troublesome interference frequencies to ground. This filter network is also very finely tuned to hi-fi requirements. 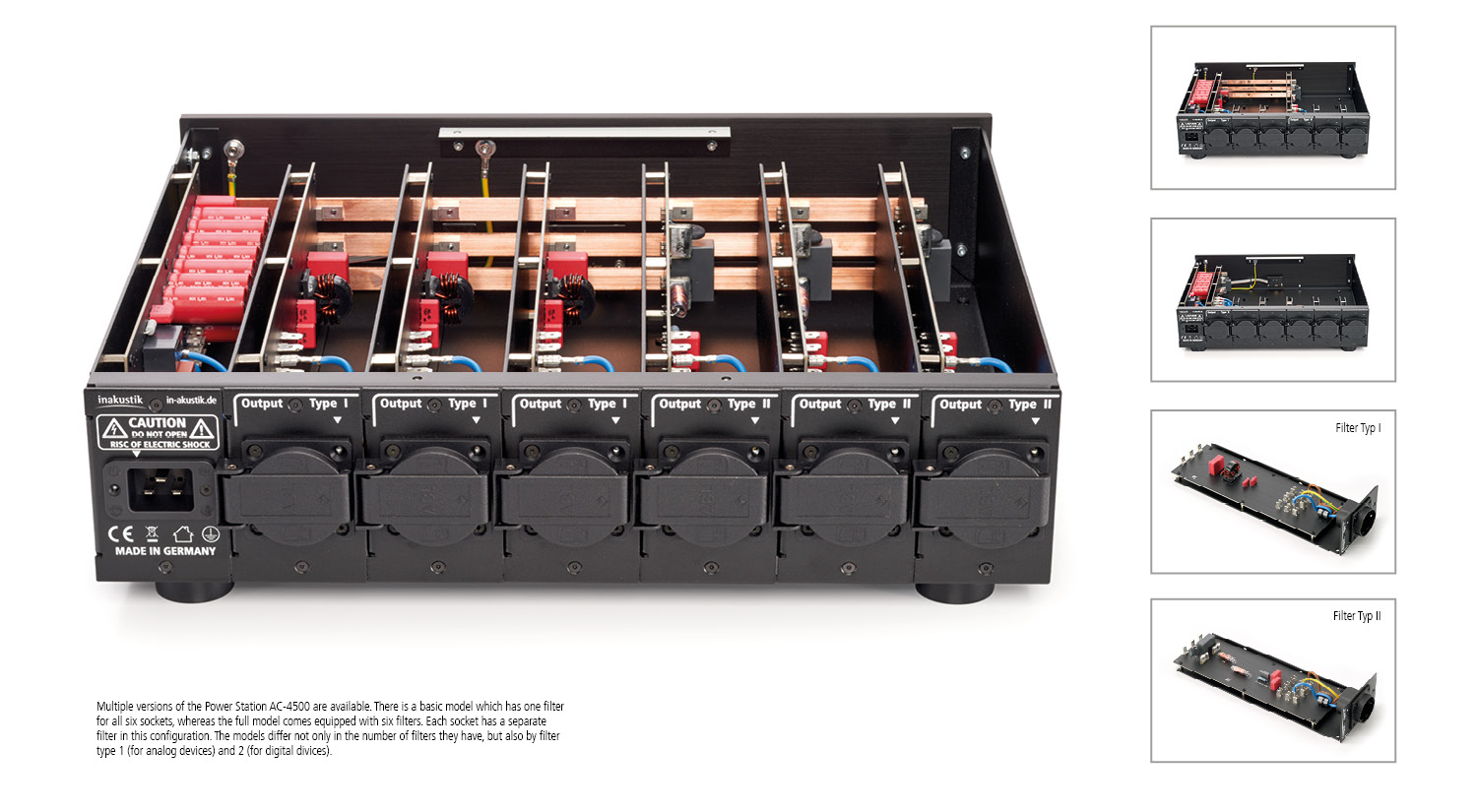 Many household devices use only a half-wave of the AC mains current. For this reason, the 50 Hz sine waveform is asymmetrical and DC voltage components emerge (DC offset). This leads to an “asymmetrical” power supply to the connected hi-fi components, which in turn can lead to saturation of the unit’s internal transformers. Alongside the many adverse sonic effects and impaired efficiency, this also results in the transformer making an annoying buzzing sound. Powerful DC suppression, which filters DC components from the power system, lies at the heart of every Referenz Power Station AC-4500. This ensures that the connected devices are re-supplied with “symmetrical” current, which protects the transformers from magnetic saturation. This prevents adverse sonic effects and stops the transformer from buzzing. Thanks to the specially selected components, the DC suppression also makes a major contribution to high-quality sound. We have also paid special attention to how power is distributed within the AC-4500. Distribution is based on a combination of solid copper busbars and special solderless high-current connectors. This design ensures that loop resistance is extremely low, which therefore provides outstanding current delivery capacity. This makes the AC-4500 a rock-solid basis for the audio system, even at extremely high volumes and during dynamic passages. 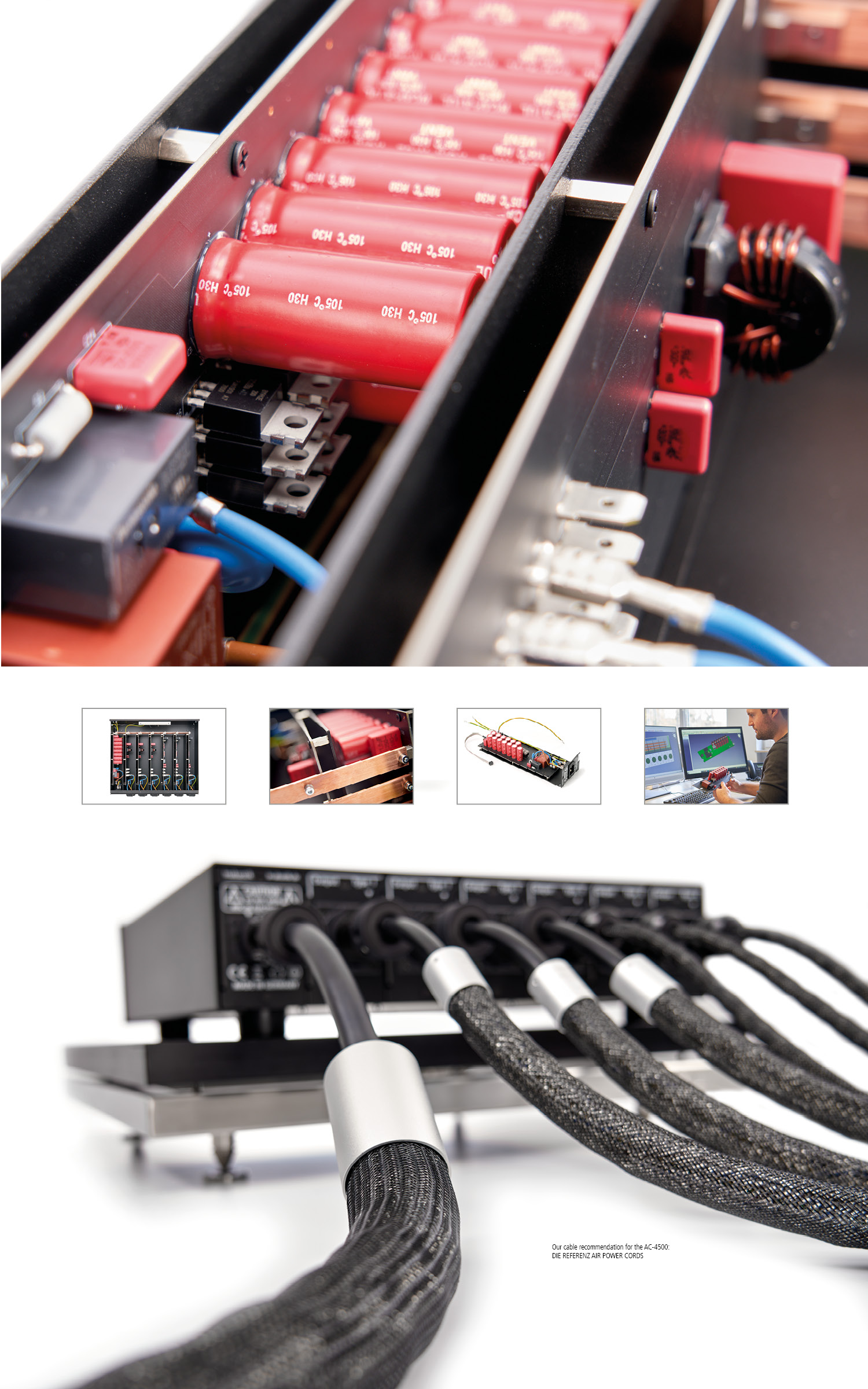