Designed, developed and made in France at the Focal workshops, Aria K2 936 is a revamped and unique edition of the flagship model from the Aria line: Aria 936.

Designed, developed and made in France at the Focal workshops, Aria K2 936 is a revamped and unique edition of the flagship model from the Aria line: Aria 936.
The iconic K2 Power cone replaces the Flax cone in the speaker drivers. Manufactured by the Focal teams, this aramid fibre cone delivers a dynamic, powerful sound, in addition to giving Aria K2 936 exceptional character. In a stereo installation, the listening experience speaks for itself, whatever genre of music you like to play. Alongside its impressive performance, the model boasts a modern design, enhanced by the Ash Grey premium finish from the Utopia line and a front panel adorned with an elegant leather effect.

Our Aramid fibres sandwich cone, recognisable by its distinctive yellow colour, is the symbol of K2 Power Car Audio line.

Used in JMLab Vega or Antea high-fidelity speakers, the K2 sandwich cone was introduced for the first time in 1986 with the use of Polykevlar. The Poly-K cone is composed of two layers of aramid fibres, applied to either side of a hollow micro-ball structure in order to improve the balance between weight, rigidity and damping.

THE CONE AT THE HEART OF THE PERFORMANCE

In 2016, our Aramid fibres cone has evolved, but preserves its identity and the combination of its three key factors: rigidity, lightness and damping. The goal: guaranteeing high-quality audio reproduction whatever the genre of music you listen to.

It is now composed of a very light foam layer, between a layer of Aramid fibres and a layer of fibreglass, ensuring clear and precise sound void of any colouration. 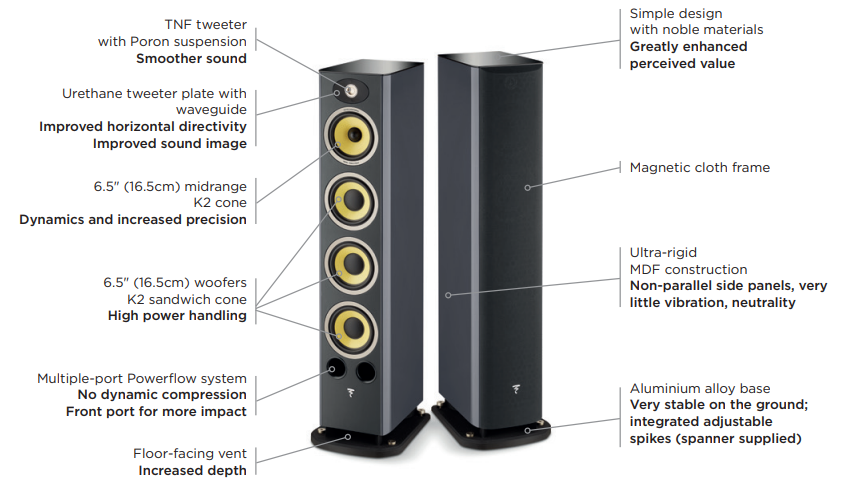 Made in France in FOCAL’s Ateliers, the 1000 Series are equipped with Focal’s world-renowned technology: ‘W’ sandwich cone and Beryllium tweeter. The sound delivered is remarkably clear and precise.